Folsom is a municipality in Sacramento County, California, USA. It is located in the suburbs of Sacramento and is best known for its famous prison. Its population stood at 72,203 during the 2010 census, estimated at 79,022 inhabitants in 2018. 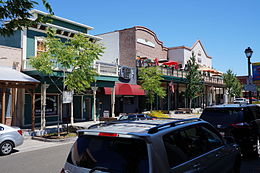 The historic federal park of the Folsom plant along the American River.

Folsom began as a small town called "Granite City", inhabited mostly by miners looking for gold in the hills of the Sierra Nevada. Although few of them amassed a fortune, the city prospered thanks to the lobbying efforts of Joseph Folsom to build a railway line linking it to Sacramento. Folsom died in 1855, and the city was later renamed Folsom in his honor. The railway was abandoned in the 1950s and subsequently reopened as the terminus of the Gold Line of the regional service around Sacramento. A few other gold rush-era cities that are now extinct were located within the boundaries of the present-day town of Folsom, such as Prairie City, Salmon Falls, and Mormon Island.

Folsom prison was established in 1880, when the Livermore family made an agreement with the state, giving land for the prison in exchange for hours of work for the prisoners. Their plan was to build a hydroelectric dam from the American River to supply a sawmill. The sawmill failed, but the Livermores soon realized that the natural force of running water could generate enough power to transmit it to Sacramento, and so the Folsom plant, now a National Historic Landmark, was opened. At the time of its opening, it offered the longest electricity transfer (about 35 km) of the country. The plant was operational until 1952. Foslom Prison appears in several films, but it has mostly remained famous because of Johnny Cash's song, Folsom Prison Blues, which he wrote in the 1950s and recorded in prison even in 1968.

The Folsom Dam was built in 1956, providing much-needed control over the flow of water and associated rights in the Sacramento Valley. The creation of the dam also led to the creation of one of the most popular lakes in Northern California, Lake Folsom. The dam is located at the southwestern end of the lake, which extends approximately 7.75 km from Granite Bay to the southernmost point.

Today, Folsom is a city mostly inhabited by the upper middle class, with numerous parks, good schools, a historic part. It is also home to the largest private employer in the Sacramento region, Intel.